An Honor from the International Space Station

We were honored to receive the following message and picture of our patch from Astronaut Col. Andrew Morgan who is currently orbiting the Earth from the International Space Station!

Greetings from the International Space Station, currently in orbit 250 miles above the Earth! This photo was taken from the “cupola” our window looking back on our beautiful planet. Thank you for your service to your community—it’s a place that I consider to be my home on Earth.

Notes from his dad Richard Morgan who is a Neshannock Twp resident:
Andrew, a NASA Astronaut, launched to the International Space Station (ISS) in July, 2019. Before he launched, he gathered various patches from local first responders to “fly” with him into space so that he might share his experience with you. He has deep roots (4 generations) in the Lawrence County area and a special appreciation for first responders, since his background and much of his training in the Army and as a NASA astronaut are similar to what you may have experienced. He is proud to have Western PA in his blood and represent our communities.

Andrew is one of 6 current crew members. He will return home sometime in April after nine months in space. The ISS has been orbiting the earth for 20 years and is continuously crewed by an international crew; an American is always among the crew. As Andrew mentioned above, the ISS orbits about 250 miles above the earth at 17,500 mph…orbiting the earth once every 90 minutes. The ISS is visible in the sky above the earth. The app GoISSWatch is a great way to find out when and where to look for the overhead passing of the ISS in the night sky.

What an honor —- thank you so much NASA Astronaut Andrew Morgan! 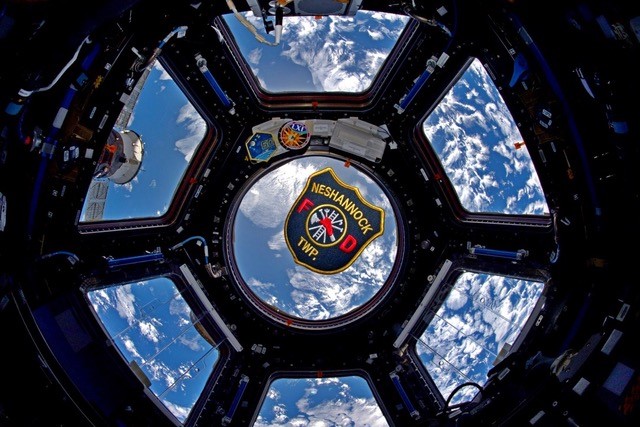